The Silent Strength of Stones by Nina Kiriki Hoffman

Seventeen-year-old Nick is working at his dad’s motel and convenience store on Sauterelle Lake, in the Oregon Cascades for the summer. He’s a quiet, lonely boy, who systematically spies on the various holidaying families, but he’s also hard-working. I wasn’t sure I liked him much as a protagonist for the first few chapters. Anyway, a peculiar family take one of the most tucked-away cabins out by the lake and Nick becomes fascinated by their odd behaviour, by the hypnotic young woman with them and by the strangely tame wolf also in tow. 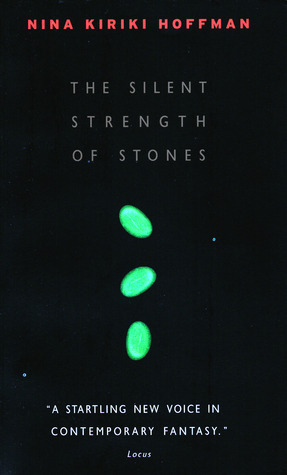 While I fell head-over-heels for my first Hoffman read The Thread that Binds the Bones, this second offering has left me less enthused. I still love the way she writes about magic and the way her magic works, but I also felt that this book was more clearly pitched at a young adult audience and the concerns of its teenage protagonists are no longer my concerns. (Saying that, there are no love triangles, barely any romance, and the main relationship is a friendship between two boys, which makes it unusual for a YA).

However, something that continues to fascinate me about Hoffman’s writing is her exploration of power dynamics. She particularly addresses abuses of power and the experience of powerlessness, but not in a wallowing or rub-your-nose-in-it kind of way. Rather, she seems to focus on how a person might begin to move past these things, slowly, with work. And on how a kind of peace cannot always be reached.  To me that seems pretty unusual, but I’ll admit I’ve maybe not been reading the right books.

The most significant event in Nick’s short life so far is his mother’s leaving him and his father four years before the story begins. His relationship with his mother was intense and tinged with magic and the lake – and the woodland surrounding it – is deeply tied up with Nick’s memories of his mom. She’s been sending him regular letters that he refuses to read and his relationship with his dad is not at its best. He is hurt and powerless to do anything about that hurt. While we’re never privy to his father’s feelings, I suspect his behaviour comes out of a similar pain. Over the course of the story Nick gains some insight into his mom’s motivation for leaving, and into his dad’s state of mind. It requires that he step beyond his own feelings to see that his parents are human, capable of good and bad actions, as vulnerable as he is himself.

With regards to the peculiar family staying at the cabin, Nick befriends the hypnotic young woman, Willow, and the wolf, her brother, Evan. They are staying with their aunt and uncle because of some messed-up family business (which we glimpsed in The Thread that Binds the Bones too – and which is the only thing that really links these two books) and are both dealing with having lost their baby brother, who was murdered. Their aunt and uncle, meanwhile, have come to the lake to try to communicate with some local spirits.

What follows is a discussion about consent and about dysfunctional families. The inability of children to consent to their parents’ actions and the point at which that changes when they reach adulthood. The other ways in which family members manipulate one another. The use of magic to compel people to do things against their will. Teenagers pushing the boundaries between themselves, and between themselves and adults, finding where the lines are drawn and the beginnings of their independence. The ways in which parents and carers both fail and succeed, often simultaneously.

Most importantly, though, Hoffman continues to explore her unique brand of magic. As a keen collector of stones, imagine my delight when Nick discovers that the stones he collected as a child were local spirits, or skilliau. And I loved Father Boulder, although I’ll not say any more about that. Nick’s connection to the lake, his inability to drown in it, it’s protection of him, the way he greets it every morning, was all beautiful. And Willow and him becoming the prayer to the natural world around them at the end was the kind of stunning moment I wanted to last forever.

This story struck me as an uneven one. There were things I loved (the magic; Evan; the wilderness of the lake and woodlands; how well the magic was shaded into the mundanity of Nick’s shelf-stacking, price-checking, meal-making, trying-not-to-piss-off-his-dad life) and things I did not love (Willow and Evan’s aunt and uncle; Mariah’s feelings about Nick using his persuasive voice on her and his lack of apology; Nick’s mom’s reasons; Granddad’s moment of lucidity). I’m glad I read it because Hoffman’s writing is a treat, but I probably won’t read it again.

As this was published in 1995 (which I’m still reeling from a little, I was fifteen in ’95! I don’t feel that much older now), it is eligible for the Backlist Bingo card created by the inimitable imyril. *cackles gleefully while adding ‘completed’ stamp*

This is where I’m at with that. Look at the pretty: