In The Anvil of the World Kage Baker introduced us to a fantasy world peopled with the calamitous Children of the Sun, the gentle Yendri and the chaotic race of demons. There was a lot of fun to be had in the meeting and mingling of these three peoples, along with some pointed observations about humanity that made the book more than just another amusing fantasy adventure. So when I found The House of the Stag in the discarded books pile at work (with a badly broken spine) I swiped it. Naturally. 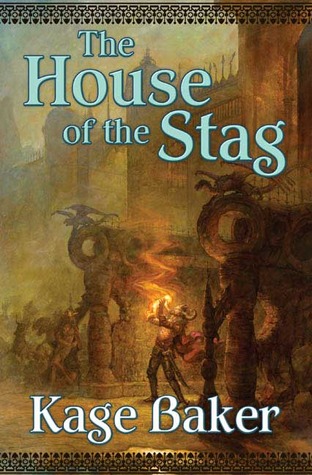 In Anvil Baker created the Master of the Mountain, a demonic Dark Lord, and his wife, a literal Yendri saint, born from a flower and known as the Unsullied Daughter, the Unwearied Mother and the Green Saint. And she created Lord Ermenwyr, one of the couple’s many children, who shared reminiscences of a childhood formed by this seemingly contradictory marriage. The House of the Stag proceeds to tell how the Dark Lord and the Saint came to be, and how they met and married.

I was both pleased and disappointed in about equal parts with the outcome.

What worked for me?

I loved that a lot of time was spent with the demons of this world, exploring their nature. Baker’s demons are by turns beautiful and ugly. They are elemental beings, and when we see them in their true forms they’re stunning. However, they are often coerced into corporeal bodies by mages, and can also *ahem* couple with the Yendri and the Children of the Sun, which results in half-demons, born into earthly bodies. Demons seem to be characterised by a love of pleasure and by amorality. They are also invariably the most sympathetic characters in the book. Make of that what you will.

Gard’s journey from foundling to Dark Lord was brilliant. Found as a baby dumped on a hillside (the result of a demon-human liaison) he is adopted by a Yendri couple and brought up with their other two children. The Yendri (who aren’t the Yendri yet really, they’re just people who’ve not met any people unlike themselves and so don’t need a name) are a peaceful forest-dwelling group soon bullied out their home by the Riders, the first group of people not like them. They respond by hiding and running, something that Gard cannot understand. So he fights back, guerrilla-style and somewhere along the line becomes enslaved. This is where his story really gets interesting. As a slave he meets fellow demons and half-demons for the first time. His size and strength see him become a gladiator, and his smarts see him become a mage. He’s then a tourist, a stevedore, a gardener, an actor and a soldier in swift succession, always picking up skills and knowledge that he eventually channels into the performance of his life: that of the Dark Lord, the Master of the Mountain.

The early days of the marriage between Gard and the Saint was also fabulous – after a rough beginning their relationship is funny and sweet, and I wanted a lot more of it.

Baker pokes glorious fun at a lot of epic fantasy tropes and traditions. When Gard joins Tinwick’s Theater this becomes particularly pronounced, as it does again when he joins the army. All of this was hilarious and made reading very slow because it turns out my eyes scrunch up quite a lot when I’m laughing and I can’t always see the page.

What didn’t work for me?

I was much less interested in the Beloved and the Saint, and the origins of the Yendri. Or, at least, I liked some of it – how they became healers; the internal conflicts over the use of weapons and the need for guards and defences; the later debates over what the Beloved really meant when he said this or that – but the tone felt quite different to the Gard sections and I found that a little jarring. Also, a lot of this was implied quickly and neatly in Anvil so that its elaboration here seemed … superfluous.

I was frustrated by a device Baker used a couple of times. I think I understood what she was doing by using it, but I didn’t like it. At the beginning, and then several times throughout the book, Baker stepped back from the story and slipped briefly into the present continuous tense, picking up the reader and placing them in the story. First, we see cave paintings, later we read from a ‘book’ made from stacked leaves, always the suggestion is that we are hunting out the story of Gard and the Saint from fragments left behind. This kind of thing usually gets me all excited, but it was used so sporadically in The House of the Stag that I simply found it disconcerting. It was like being poked in the side while comfortably reading.

And finally – something that isn’t so much a criticism as a hope thwarted – I was sad not to see Lord Ermenwyr as a child. I hoped we might at least get to see first-hand some of his childhood shenanigans, but other than the briefest of glimpses of him as a babe in arms, I was left disappointed. I did get to meet his oldest brother Eyrdway, but that wasn’t much of a consolation.

I wonder if this would have worked for me had I been in a different mood? I don’t know. I feel that most of what I learned about Baker’s fantasy world here was just unnecessary expansion on things I already knew. Which sounds harsh. I don’t mean it quite as viciously as it sounds. Perhaps it comes down to the type of reader I am. I’m sure there is a lot of satisfaction to be had from just taking everything from an author as they lay it out before you, but I enjoy thinking into and around things before answers have arrived. I think that’s why I enjoy the Wyrd and Wonder read-alongs so much, because we all get to throw out theories and conjectures about what’s happening and what’s going to happen next (The Bone Shard Daughter being a heck of a case in point).

Which is to say that while reading The Anvil of the World I was poking about amongst all the little hints and clues about the world and the marriage between the Saint and the Dark Lord and gained enough to satisfy my own small questions. And here are all the answers written in bold now, and … I’m good.

2 thoughts on “The House of the Stag by Kage Baker”