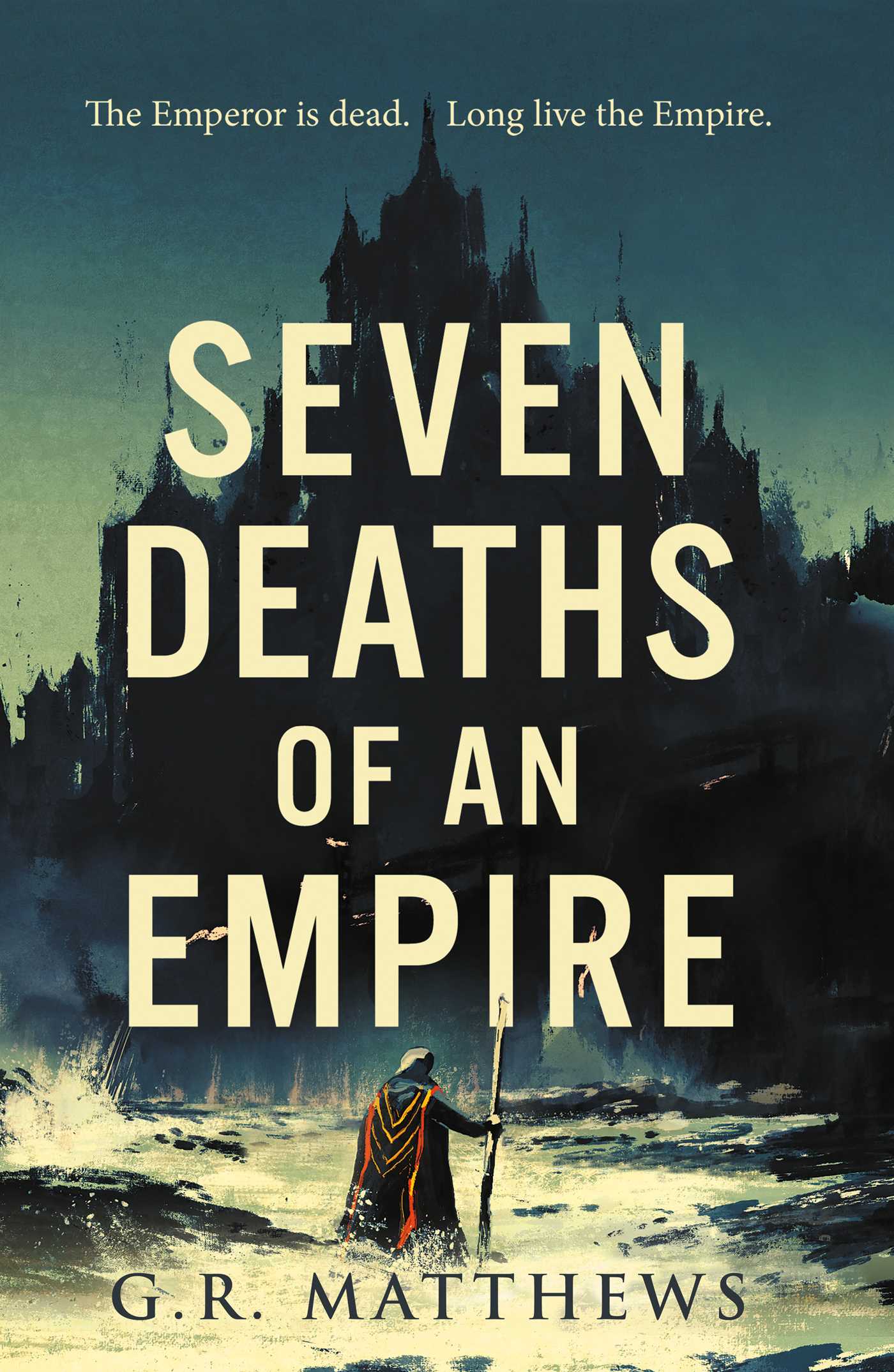 The Emperor has died and before his heir can assume his mantle, his body and the sacred amulet he wears must be returned to the capital for the coronation rituals. Unfortunately, he died while campaigning in the North and while an honour guard has been chosen to bear him home, any number of key players could die before they get there…

…seven of them at the very least.

Matthews’ story follows a young man and an old one. Apprentice Magician Kyron, along with his Master, Padarn, is travelling home with the Emperor’s body; and, back in the city is General Bordan, trying to keep the peace in the political arena. I liked this – that these two characters were not in their native habitats, the young magician with the army and the old General having to play at politics – and I liked that their stories were told in alternating chapters, slowly drawing closer together until all the characters collided.

The Empire has existed for hundreds of years at the book’s opening. Heavily borrowing from the Roman Empire for its structure, culture, combat techniques and language, Matthews keeps up an ongoing discussion about the nature of empire throughout which, while not new, is still interesting. What’s more interesting is how fragile this massive assimilation engine really is. The Emperor’s death creates a tiny crack which, under just a little pressure, splinters outwards. Not because he in himself wielded total control, so much as because his death provides a catalyst for changes already bubbling under the surface. And there is something strangely fascinating about watching a behemoth fall.

Because for all that this is a chunk of a book, weighing in at six-hundred and eighty-two pages long, it was a fast read. Even for me. Some of this is down to the characters, a lot more of it is due to a growing feeling of expectation as the story unfolds. The reader knows there will be at least seven deaths (and yes, I counted them), but more than that, as the plot thickens we’re searching for a pattern. There is the feeling that something worse is coming and if we, and the General, can just see it in time something can be done …

I liked General Bordan much more easily than Kyron the apprentice. He and his two closest colleagues Master Vedrix of the Gymnasium of Magicians and High Priest Godewyn of the Flame are three old men who have each given their service and loyalty to the Empire and to the now dead Emperor. Most of their exchanges gave me a smile at least, experienced men that they are, trying to guide younger characters to sensible action. And I sympathised with Bordan’s aches and pains, his dismay at his body’s reduced capacity and stamina. In comparison, Kyron and the Emperor’s heirs Alhard and Aelia are irritatingly quick to pass judgment about things they don’t fully understand. And while Kyron grew on me (it helps that the reader is given glimpses of the thoughts behind his statements and actions and that his Master, Padarn, suggests he’s worth the effort), the prince and princess never did.

Emlyn, the young guide to the honour guard carrying the Emperor’s body, is a more instantly likeable character too. Straight-talking and pragmatic, she maybe leans a little heavily on the mysterious tribeswoman trope at first, but her consistency and the slow thaw between her and Kyron (no romance! Don’t panic!) keep her on the right side of interesting.

All of that said, I’d have welcomed more flesh on all of the characters’ bones, bar Bordan. I feel that characterisation was often sacrificed to world-building and am left with only the sketchiest impressions of many of the players on Matthews’ stage. What was there was good, a little more, however, would have been better.

What I enjoyed most of all was how magic operates in this world. Perceived as motes of light by those sensitive to such things, magic can be drawn into patterns – “constructs” – for various purposes, limited seemingly only by the imagination of the magician, although distance reduces the solidity of magic, (you can’t, for example, hurl a fireball out of visual range, but you can communicate across miles with one who is trained to receive such transmission). More fascinating, is the tension between the Church and the Gymnasium, and as the beliefs and practices of the two institutions are explored, we start to see why.

There’s a lot to appreciate in Seven Deaths of an Empire. A story about youth and age, about inevitable change, about loyalty and family and about the nature of empire, the world in which it is set is well-built and has a lot of stored potential. The way the story is told is appealing and Bordan and Kyron are contrasting characters through whom we see both the good and the bad of the Empire. All of the battle scenes were well-researched, dynamic and, dare I say it, enjoyable. Little things like the significance of names and how often a soldier or a priest turned out to be a woman rather than a man appealed to that part of my brain that notes down these things. While this was not a book written for me, if you know what I mean, it was an entertaining read and this is certainly a world I could bear to spend more time in, especially if Matthews chose to explore more of the territory outside of the Empire. And of course, having witnessed its first twitches and spasms, I feel an obligation (and maybe even a kind of sick fascination) in seeing this Empire’s eventual fate.