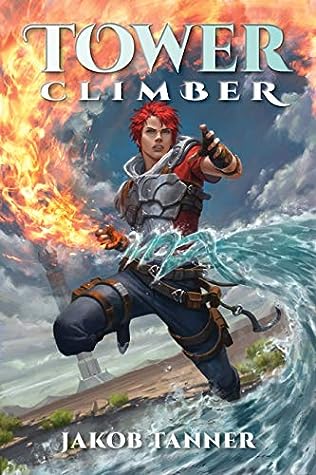 I had tons of fun reading this book. While only vaguely aware of the term LitRPG, I remember reading a magazine series called The Ancestral Trail when I was a young teen, which followed a similar pattern of storytelling, and which I loved. I didn’t know what to expect when I first picked up Tower Climber, but finding a story that followed a videogame-like progression, with levelling up and boss fights, was delightful and I whiled away a happy afternoon in the company of young hero Max, his mentor Sakura and friend Casey.

At the centre of the city of Zestiris is a tower. It appeared overnight forty years ago, emanating magic and issuing forth waves of deadly monsters. Life is Zestiris is dictated by the tower and a giant wall has been built around it creating a ‘tower zone’ and an ‘outer rim’ to the city. In the outer rim life continues almost as normal. The monsters and magic don’t trouble the citizens there. In the tower zone ‘climbers’ of different strengths and abilities fight back the monthly monster waves, keep the peace and try to puzzle out the challenge presented by the tower. The flow of information between the outer rim and the tower zone is strictly controlled.

Sixteen-year-old Max, wheelchair-bound after the car accident that killed his parents, lives in an orphanage on the outer rim. He’s bullied at school, abused by the manager of the orphanage and clings only to the hope that he can somehow make it to adulthood and into the tower zone where he believes he may find his lost younger sister. Tanner doesn’t hang about and Max doesn’t have to wait until he’s an adult: when he’s thrown into the tower zone illegally, much sooner than he’d planned and during a monster wave, his chances look slim. Fortunately, he not only discovers powers he didn’t know he had, he also meets the badass Sakura the Golden Blade.

Max quickly finds himself in possession of fully-working legs (his disability part of a mysterious curse that presumably the series will explore in due course). He also learns that his new magical power is an unusual one (about which I’m saying no more because it’s really very cool), and that his mentor-roommate Sakura is a romance-reading, ramen-eating commander, who encourages him to join the climber academy so that he can pursue his sister into the tower. The story then follows his progression through training, reading like a wonderful mashup of Battle Royale and Miss Cackle’s Academy for Witches.

As a LitRPG the focus is very much on Max’s advancement. The tower and the tower zone follow videogame rules: defeated monsters drop cores and money, each climber has a set of statistics (strength, speed, stamina etc) that they can pull up Jumanji-style, and they have to achieve a certain level before they can ascend further up the tower. Powers and traits are acquired along the way, secret bosses uncovered, and everyone has a magic pouch into which they can shove all manner of things, inventory-style, without the bulk and weight those things should present. As someone who loves to go mining in Stardew Valley day after day just so I can collect ridiculous amounts of ore, Max farming monsters on level two of the tower and ending up with 3068 copper monster cores to take to the market made me grin stupidly.

This is definitely not going to be to everyone’s taste. It’s straightforwardly told and I feel it reads a little younger than its teenage protagonists suggest it’s aimed for. If it weren’t for the carnage towards the end of the story I’d be recommending this to our Beast Quest readers in the library. It’s a satisfying read if you enjoy progression gameplay (oh hai, it me), don’t mind your stories trope-heavy and aren’t looking for deep and meaningful characterisation. There’s a twist that I liked a lot, but I’m not going to guarantee you won’t see it coming just because I didn’t. And I really didn’t. For me, after a difficult couple of weeks, this was exactly the kind of fun I wanted and needed and I am grateful to Jakob for sending me a free copy to read as it’s not a book I’d have found on my own.