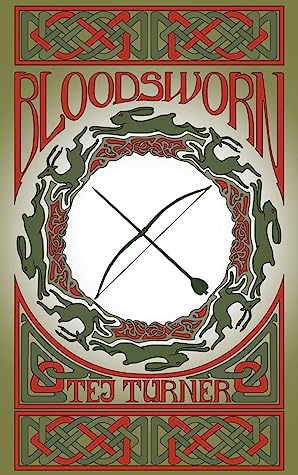 This is how it started: I settled down to read, happily sinking into the story of Kyra competing with the boys to be the best fighter, and Jaedin lost in his books and used to being on the outside of things; I watched on with deepening interest as the Academy representatives made unexpected choices from the youth of Jalard; comfortable with where the story seemed to be going as a journey began and those who remained behind started to come to terms with not getting to go …

… and then the monsters arrived.

I flew through the rest of this novel at a breakneck pace, enjoying every minute of it, smitten with the monster-people-creatures, absorbed by the shifting group dynamics and steadily growing stakes, fascinated by the magic and the tales of the gods.

Tej Turner tells his story through a diverse group of mostly young characters. While they’re not all friends with one another, they have grown up together in the small village of Jalard. Kyra is one of the only girls skilled at hunting and fighting, much to the disgust of some of the lads. Rivan is her rival, and something of a ringleader among the boys. Sidry and Aylen are Rivan’s cronies, and Dareth a sullen hanger-on. Jaedin is gentle and studious, an easy target for the others, but also Kyra’s friend. Bryna, his twin sister and Kyra’s other closest friend, is delicate and odd and learning to be a healer like their mother. Miles is a scholar and Jaedin’s mentor. Baird is an old soldier and Kyra and Rivan’s teacher. As this disparate group of survivors work together to protect their home the author captures the tensions, the friendships and fallings-out, the new insights and shifting alliances amongst them all beautifully.

And they face seemingly impossible odds against the strange Zakaras and the machinations of the evil Shayam. To be honest, Shayam was, for me, a typical beard-stroking (he doesn’t), finger-steepling (doesn’t do that either) bad guy with delusions about world domination, but his creatures, the Zakaras, had me enthralled. They can appear human, but are able to transform into insect-reptile-mammal-hybrids of varying sizes, sporting fangs, carapaces, spines, talons and tentacles. They are vicious and near-unkillable. If you are killed by a Zakara, chances are you will become one. And so their numbers grow.

In another strand of the story the gods – of which there are at least two groups, the Ancients and the Other Gods – are nearby, taking an indirect hand in the events that the survivors from Jalard find themselves caught up in. The lives of Miles and Bryna, in particular, are touched by the goddess Verdana, and Baird and Sidry become avatars of Gezra (aka awesome, glowy fighting machines with swords for hands), although we have yet to learn the full import of such things. Suffice to say what Turner reveals about this world’s mythology has me eager to learn everything and the family tree of gods and goddesses provided at the back of the book promises lots more to come in subsequent volumes.

Woven into all of this is a mysterious plague, human experiments, magical stones discovered at an archaeological site, the threat of war between the nations of Sharma and Gavendara, turncoats, and the risen spirits of the dead. The pace never slackens and while the story doesn’t end of a cliff-hanger, it finishes with plenty yet to be discovered and explained and a mammoth task yet to be accomplished. It’s a good place to stop and rest, but the adventure is far from over.