The House of Shattered Wings by Aliette de Bodard 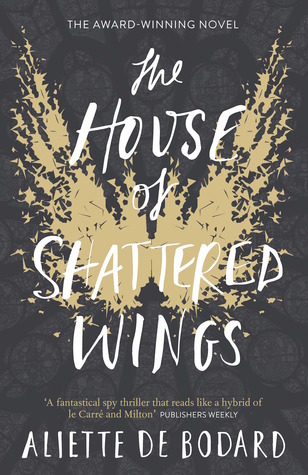 Note to self: when imyril tells you something is awesome and you should read it, drop everything and blooming well read it. Immediately. This will save you a lot of kicking yourself later on.

Because The House of Shattered Wings really is awesome. Here’s why:

It’s dark. The kind of gothic darkness that is a delight to wallow in. Set in a post-apocalyptic Paris after the Great War with Heaven and between the many factions of fallen angels, this is a story that drips with dark magic. While the Fallen are at the top of the food chain, they are also desperately vulnerable – their bodies (their bones, their hair, their very breath) a highly valuable source of power. The book opens with a newly Fallen being harvested in this way, two fingers removed before the gang members who’ve begun the work are interrupted.

The Fallen have coalesced into Houses, each with their own territory, and their own dependants and informants, caught in a continuous wrangle for more power and influence over the blackened, war-torn, magic-polluted Paris.

They waft dramatically about the city in their stylish threads, irrepressibly stunning, but as one of the most powerful Houses, Silverspires (once Lucifer’s own House), falls prey to a murderous shadow, the other Houses begin to circle, like wolves.

And if you don’t belong to a House? Then you’d best belong to a gang. No-one is truly safe in this world, whether you’re affiliated or not, but to be alone is to be the easiest of pickings. There are no good people left standing.

It’s nuanced. De Bodard writes characters in the subtlest shades of grey and there’s not one character in this book who can be wholly hated … or loved. The Fallen are a strange mix of phenomenal arrogance and heart-wrenching innocence, as confused and lost and alone as any human. Madeleine, one of very few entirely human characters, is an angel-essence addict with all the cunning and cowardice that that addiction entails, and yet so desperate to be safe and driven as much by this as by her grief. And Philippe, once human, now something other, embodies two worlds (at least) – his home Vietnam, and the coloniser France, where he finds himself stuck after being unwillingly conscripted into the Great War (with Heaven), with no way of getting home. Philippe is twice out of place as an immortal back in the mortal world too, but that’s a story for you to discover for yourselves if you’ve not yet read The House of Shattered Wings.

Equally delicate is de Bodard’s handling of the many gods and spirits that she casts into her pot. I get the biggest kick out of books that do what this book does: not favouring one mythology over another, but allowing that if one is true then they must all be true. And so the Seine is home to the dragon kingdom, as far from home as Philippe, Greek deities still lurk in the world, and the Fallen too:

“Beyond Europe, before the mad rush to colonize other countries and bring their wealth back to the motherland, there had been – other beings, other Houses: the nahual shape-shifters of Mexico, the jinn of Arab countries, the Jewish shedim and nephilim – and once, a long time ago, the demi-gods and heroes of ancient Greece and ancient Rome – long since vanished and crushed by newer magics …”

It’s the most beautifully written thing I’ve read so far this year. Not only is it technically well written, with the mystery at its heart meticulously following the rules of the world and the many threads of its story tightly worked together, it is also gorgeously, lusciously written. Silverspires, physically housed in the edifice of Notre Dame, is a vision of both opulence and decay; Paris is a hollowed-out shell and the Seine a violent, magic-polluted torrent carving its way across the city; the dragon court beneath is a slowly crumbling coral palace, lit with shifting underwater light; Madeleine’s laboratory a clutter of artifacts – compact mirrors in which angel-breath has been caught and boxes of angel skin, hair and bone fragments; and the Fallen themselves, visions of Belle Epoque elegance – particularly Selene in her tailored masculine suits and Asmodeus in his top hat and horn-rimmed glasses. All these details make de Bodard’s world more vital and present, and I got happily lost in her dark and troubled city.

Imagine my glee knowing there is more to read in this immersive world, characters to meet and re-meet and further knotted plots to untangle. Glee!