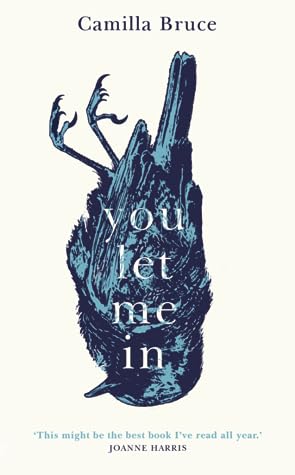 Something I love most about gothic novels is the framing device used to draw the reader out of reality and into spooksville. Whether it be found documents, letters, diary pages or, as in You Let Me In, a confessional document left with a set of instructions for the beneficiaries of the main character’s will, I love that feeling of sinking into another person’s reality.

Cassie’s reality is a dark and fractured thing. A successful romantic novelist in her later years, she is also a notorious local figure, having been on trial for the murder of her husband years before. At the age of seventy-four she has now been missing for over a year, which activates her last will and testament and summons her niece and nephew to her home where they are to read a confessional document written by their aunt. What follows is a tale of faeries, of abuse, and of stories.

Pepper-Man enters Cassie’s life when she is just a child. He is very tall and spindly and gnarled, with long white hair. He is a looming, overshadowing presence and from the moment we meet him he is a part of everything. He is the reason for Cassie’s ‘bad’ behaviour, plays a hand in her husband’s death and, later, the deaths of her brother and father; he haunts and accompanies her throughout her life. He changes over the course of the book from a sinister and mischievous being, to a lascivious one, to a seemingly protective one and under his influence Cassie develops her odd amorality. Or Pepper-Man is a figment of Cassie’s imagination, an obfuscation of the reality in which she is abused by her father.

But does it have to be a story of either/or? Cassie admits at one point in her confessions/recollections that she is no longer sure where the truth lies, but that doesn’t make her experiences any less terrifying. Pepper-Man is certainly more real in the book than her father is, a man about whom we learn only vague biographical details and who has barely any physical presence at all. Similarly, Cassie has some confused memories of a possible trip to an abortion clinic, but far more visceral memories of the birth of her faerie child, Mara. This doesn’t necessarily mean that only one of these things happened. And while Cassie’s psychiatrist Dr Martin has plenty of thoughts about the symbolism of such things, do his theories ever help Cassie in any meaningful way?

Another aspect of the book I found almost as fascinating as the question of ‘truth’ was the recurring images of sweet fruits and foods. From her affectionate description of her lilac house as an “overdone birthday cake” with “old frosting sliding off the edges”, and her calling her beautiful little sister “sweet as marzipan”, Cassie speaks again and again about cakes and sweet things. Good girls “smell like burnt tangerines” while bad girls (like herself) “smell like ripe apples”; her father gives her caramel cupcakes and the faeries give her honey cakes and milk (and both take something from her in return); and she mentions cinnamon buns, strawberry tarts, frosting and cream on various occasions. Sometimes these sweet and tasty things serve as a counterpoint to terrible goings-on, sometimes they underline the joy of childish pleasures. Cakes are, at different times, welcoming and comforting, forbidden and unnourishing, placating and silencing. Just as the truth is many things in You Let Me In, so too are sweet delights many shades of light and dark.

The beauty (and limitation) of the found document as a story device is that the reader is completely immersed in one character’s way of seeing the world. We never see Penelope and Janus’ own reactions to Cassie’s home in the woods, or to her story once it’s told, only Cassie’s imaginings of what they might think, say and do as they approach and enter the lilac house, find her study (gloriously described and definitely worth reading over again once you’ve read the whole book) and discover the stack of pink paper on which Cassie has laid out her tale. At the end, we cannot see how they react to what they’ve learned from their aunt and are left in an ambiguous position on which we must each decide for ourselves where the truth might lie. As both professional storyteller and a survivor of abuse, maybe Cassie has yet to decide too. Either way, the ending is a brilliant last twist of the knife and the perfect conclusion about which I will say nothing more.

This was a beautiful, compelling, unsettling read that I consumed in one feverish sitting. I loved every ambiguous twist and turn, I loved Bruce’s clever writing, and I really loved that ending. This one will sit with me for quite a while, I reckon.

“Truth is such a fickle thing, isn’t it? Subjective and shifting like a living being.”

NB: Tammy and Mogsy both gave brilliant reviews for this book and I doubt I’d have looked at it twice if they hadn’t. A huge thank you to you both – never underestimate your bloggy powers!

9 thoughts on “You Let Me In by Camilla Bruce”