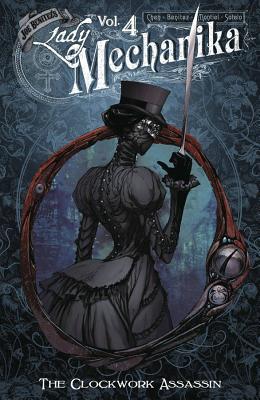 I have enjoyed each volume of Lady Mechanika so far, but must admit to also being a little disappointed that, after the first two lovely chunky volumes, the following episodes have been shorter and very much monster-of-the-week in content. Mostly my disappointment has been focused on the fact that there didn’t appear to be more than seven volumes published (I went ahead and ordered everything I could find when I finished The Lost Boys of West Abbey), which is definitely not enough space in which to conclude everything that’s been started. I’ve basically been anticipating the disappointment of an incomplete, hastily tied-up ending. However, I read here only last week that Image Comics have taken Lady Mechanika on and that sad little sinking feeling in my stomach has now miraculously vanished. Hurrah!

In all seriousness though, this series has oodles of style and substance, on par with both Saga and Monstress for its involved, entertaining stories and stunning visuals, and I’m so pleased to know it’ll be continuing.

I said here that I wanted more details about Mr Lewis’ backstory, and in this volume that is exactly what we get. (I wonder if I should start posting about all the things I’d like in the hope that they’ll materialize as quickly?) We learn about the past event that haunts Mr Lewis and about his previous work for Blackpool Armaments. We meet some of his old colleagues and friends and get a nice big slice of world-building as we learn about the professional competition between Blackpool and the rather fabulous, possible sinister Lady Gwedolyn Cain, head of Athena Industries. Nika is as badass as always, but also wonderfully funny – facing a friend’s accusations of murder with a cup of tea in hand, infiltrating secure buildings with derring-do and escaping near-death situations “with all the poise of a proper lady”.

And plenty more questions have arisen during the course of the story. In fact, for every puzzle solved, Mechanika’s own mystery only seems to get deeper and darker, and the playing field larger. Her nightmares are a neat way to remind the reader of her ongoing search, as well as giving a glimpse into her state of mind (she may have taken that murder accusation on the chin, but she was thinking along very similar lines herself). Lord Blackpool continues to loom in the background, making secret phone calls to unseen collaborators and generally being a Suspicious Character, and the Ministry of Health, Mechanika City’s very own Gotham Asylum (there’s a definite vibe), looms also.

Perhaps the biggest question, for me, is why? Why was Nika created? Why all these decidedly warlike machines, such as the one Mr Lewis worked on in Project Sparta, or the one we see Yaromir tinkering with at the beginning? Who are they for? Why two big armament companies in one city? There’s mention of defending the nation, but aren’t guns enough? I’ll be quite happy to learn I’m over-thinking all and eventually discover that Nika was created by a mad scientist for no other reason than because they could, but … but why?

On a different note, I can’t help but applaud all the strong independent women this series has featured so far. Happily, not just women warriors too. Not that I don’t love Nika’s badassery, and that of the women she’s fought with and against so far, but it’s a delight to see Fred’s polymath smarts, Liesel and her mother’s STEM skills, and Lady Cain, with her all-female bodyguard, heading up a business that began “with the goal of helping women protect themselves”, even if she does eventually turn out to be evil (as yet unknown). There are still arseholes underestimating or objectifying women (looking at you Harry), but they’re more frequently getting their butts handed to them and that’s always fun to watch.

Finally, I’ve said it before, but I’ll say it again: wow, these volumes are pretty! The artwork is consistently stunning, with an incredible attention to detail and dynamic storyboarding. Everything, from palate and character design to backdrop and settings, from costumes and accessories to those beautifully intricate cog borders around some panels … everything feels like a labour of love. Benitez and his team are turning out a really exciting series here, and I hope the move to Image Comics gives them more scope to do what they’re so obviously awesome at.