Buddy-reading A Man Lies Dreaming with the Curious SFF Reader

This has been my favourite buddy read yet with The Curious SFF Reader, Maryam, not because A Man Lies Dreaming was a fun read (as you will see), but because it gave us so much to talk about. I always know I can rely on Maryam for thought-provoking and insightful reviews, and this is even more true when we buddy-read together.

So this is where to start with our conversation, then, when you’re done here, head on over to Maryam’s blog for the second half of our discussion.

Let’s dive in, shall we? 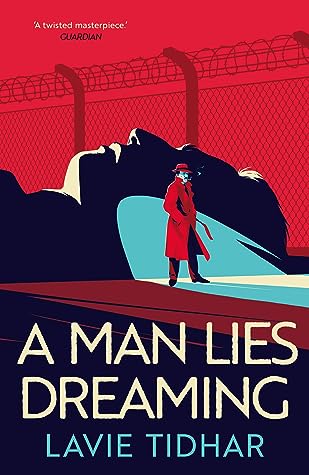 Maryam, you’ve read more of Tidhar’s work. How did this compare to your previous experience of his writing? What would you recommend I read next by him?

Maryam: A Man Lies Dreaming is my fourth Tidhar work and it was both similar and different to his other works. His books often deal with the same themes such as the unending cycle of violence and how wars affect people. His main characters are almost always unlikable and seen as losers by everyone else, they’re often used as pawns by characters that are much smarter than them, yet you can’t help but to feel for them (Well maybe not in the case of Wolf because, he’s still Hitler so it’s impossible to root for him). Tidhar’s novels tend to have many similarities, yet I’m never bored when I read one of his books because each book I’ve read by him has explored different aspects of the same themes so it’s hard to recommend a single book by him!

I absolutely love Unholy Land because the writing and the structure of the book is spectacular. I read this book three years ago (at least I think I did but what is time anyway… ) and I still often think about it. I also very much enjoyed The Violent Century because it made me think quite a bit about wars, how they affect us and why they never seem to stop. I don’t think the writing in this book is as strong as Unholy Land but it’s an amazing book. Finally, if you want to see a different side of Tidhar, I recommend Central Station, a collection of short stories set in a futuristic Tel-Aviv. It was my first work by Tidhar and I read it twice!

I hope I answered your question, I feel like I went on a long rambly tangent! By the way, I have reviews of the three books I mentioned above on my blog if you want to know a bit more about them.

Mayri: Yes, you’ve answered my question. And I don’t think you ramble! I feel bad for not first checking your blog for other Tidhar reviews though! The first I heard about this author was when Central Station was doing the rounds (I kept seeing that stunning lavender-grey cover art for it, and I’ve just gone back to check because I think it was you I heard about it from, and it was! Your review was the one that put it on my list!!) (And while we’re talking about your posts, let’s link up to your reviews for Tidhar’s Unholy Land and The Violent Century too).

I don’t think my attention would have been grabbed so much if A Man Lies Dreaming was the first book I’d encountered by him – I don’t know if this is going to make sense, but knowing that he’s done other scifi things made me interested in reading this book in a way that this book alone wouldn’t have.

While this was a difficult book to read, I really admired Tidhar’s writing style, so I’m intrigued to read Unholy Land because you feel his writing gets stronger. Thank you for the recommendation.

An alternate history in which Hitler finds himself down and out in London working as a private detective. This is a book that shouldn’t work, but does. How do you think Tidhar manages to pull it off?

Maryam: Honestly, I don’t have a clue. I still can’t believe this book was published in the first place because the subject matter is so risky. If I hadn’t read anything by Tidhar before, I don’t think I would have read this book with the synopsis alone! As you said, this book works when it shouldn’t. Maybe it’s because of the writing? Or maybe it’s because we see Hitler getting mistreated by everyone and it’s cathartic?

Mayri: Dagnabbit, I was hoping you’d have the answer to this one! Ha ha! I don’t really understand how it worked as well as it did, either. It shouldn’t work at all, making Hitler the noir ‘hero’ of a detective story. I think perhaps the puzzle of it is what keeps the reader invested? Assuming they go in not knowing Shomer’s connection to Wolf, it takes times to unravel that. And, of course, you’re absolutely right that there’s catharsis in seeing Hitler get the stick, especially when he’s an unapologetically horrendous character even in failure.

Tidhar often blurs reality and fiction in A Man Lies Dreaming. What did you think about the use of mixed media, alternate histories blended with real historical events and magical realism in this book?

Maryam: I love when authors use different formats or structures to tell their stories. It might be because I read a lot of short fiction and unusual structures and narrations are often used but I loved how Tidhar did it in this book. If you liked this aspect of the book then you should totally give a try to Unholy Land where this blurring of realities is even more heightened!

Mayri: Awesome! I am absolutely ordering Unholy Land when I’ve finished adding to this doc. I really enjoy this aspect of speculative fiction – there are so many different ways to tell a story, which change the way the story unfolds, or change the way we see characters, or change our whole experience. I get a massive kick out of this.

Maryam: Yay! I hope you like it, it’s one of the best books I have read in the last few years!

Mayri: as for my feelings about how Tidhar uses such devices in A Man Lies Dreaming, I found the blurring of reality and fiction particularly powerful. It was an incredibly disturbing technique and had me looking up all sorts of information in an effort to understand where the lines were drawn. That it made me question what I knew and look for answers to what I didn’t know was, I felt, a way of making me engage with history in a different way. I’m not wording this well, but it seemed to make history more real. If that makes sense.

Wolf becomes the thing he hates by the end of the book. How do you feel about his escape and his masquerade as a Jewish man, learning Hebrew and on his way to Palestine?

Maryam: I’m a broken record but the fact that this book got published with this ending is… a choice! If the book wasn’t written by an Israeli author, I don’t know how I would have reacted to it but knowing a bit about Tidhar and his troll-like personality, the ending made me laugh. I felt like I shared a bad joke with the author, you know? Like we all know the ending is messed up but, it’s just a story, it’s better to laugh together than cry.

Also, I think the ending worked because at this point in the story after the election, Wolf realizes that being German, he’s as much an outcast as the Jewish people. It’s not Us against Them anymore for him, he’s now (literally) in the same boat as them!

Mayri: I struggled so much to get my head around this ending. As you say, that it was published at all is kind of shocking, but … yes, it is just a story … and stories are a part of the way in which we reconcile ourselves to the past. And there, where you’ve said “it’s better to laugh together than cry”, that has made me think of Jewish humour, a little self-deprecating, a little poking fun at authority, a little resigned to the vagaries of life. From that perspective, the ending does read like the punchline to a joke, and the joke’s on Wolf. Ah, you’ve made me feel a lot better about it just by talking it out.

Are you enjoying our discussion so far? We’re nowhere near done yet! Head on over to Maryam’s blog here where our conversation continues.