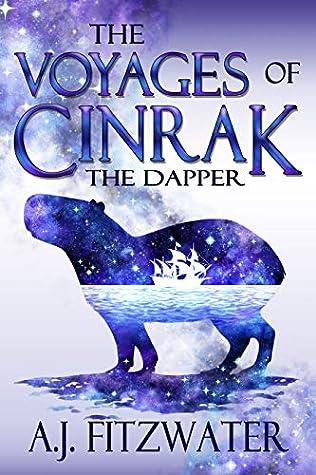 The Voyages of Cinrak the Dapper had me at hello. I knew only this when I bought it: that it was about a dapper, lesbian, capybara pirate. It was enough.

And I have not been disappointed. In the seven stories that make up Cinrak’s voyages we follow her from young orphan with pirate dreams to Captain of the ship Impolite Fortune and mother to a wonderfully eclectic crew/found-family. She is delightful throughout. A “well-read, clean and handsome pirate”, honest and brave, loving and joyous, she prefers “to dream forwards, not backwards”. And her world is as wonderful as she is – the three moons are playful and flirtatious by turns, the North and South winds are comforting and cantankerous respectively, the weather, the landscape, the flora and fauna, the heavenly bodies themselves, all have shades of personality.

Fitzwater’s language is equally full of life. They play with puns, alliteration, rhyme and rhythm throughout the book, something that could possibly annoy other readers, but which I found as delightful as I found Cinrak herself. An example? One of the tales (“tail the fifth”) is titled “The Hirsute Pursuit … To the Mountain, to See How Hairy It Is”. If that gives you a smile, you’ll most likely love the rest. If it makes your twitch or grimace, then move along, this book’s not for you.

If you are still with me, I hope I can tempt you a little further. Within these pages you will find stories of shooting stars and treasure quests, of friends and lovers lost and found. You will meet pirate rats and chinchilla, a kraken and a glass whale, Muriel the menopausal phoenix (my personal favourite), Rozozau the elegant cat spy and Columbia the beautifully coifed mer ambassador. There are no real antagonists, it must be said. This isn’t a book about conflict or intricate plots and counterplots. It is, instead, a book to read when you’re in need of comfort and wonder, for when you’ve lost interest or hope and you’re looking for a safe place. If you’ll allow me the analogy, it’s a pair of warm pyjamas and a cup of tea after being caught in a downpour.

In their introduction to The Voyages of Cinrak the Dapper A J Fitzwater suggests that joy is a rebellious act:

“We tell joyful stories in times of fear to light the way in the dark, to document that history, to model the voices that need to be heard and the bodies that need to be seen, and to simply say no, you will not take our joy from us.”

And I would say they have achieved this here. This book encourages its readers to be completely and joyously themselves, to surround themselves with those who love them for what they are and not what others would have them be, and to believe that there is a place for them in the world and to not stop looking until they’ve found it. I recommend it wholeheartedly to anyone who needs to hear that. It is both a joyful and rebellious book.