The Echo by James Smythe

Twenty-three years after the events described in The Explorer, twin brothers Tomas and Mirakel Hyvönen head up an international mission to investigate the anomaly that can be seen in the region of space in which the Ishiguro disappeared. They have dedicated their lives to this anomaly and this mission is to be the fruition of all their dreams. They have meticulously planned every detail, have spared no expense to create the perfect research vessel and put together the best team. Mira will be aboard the Lära (named for the twins’ dead mother) along with five other scientists and engineers, while Tomas will monitor and control the mission from Earth.

Needless to say, nothing quite goes to plan. 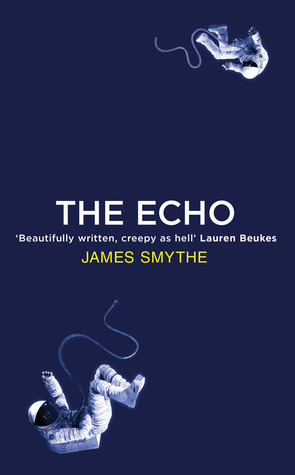 The sh*t doesn’t hit the fan quite as fast as it did in The Explorer (in which everyone was dead by page 63, and that’s not even a spoiler), but when it does, it hits hard. The title of this second volume (of a planned four) is apt. The events aboard the Lära echo those of the Ishiguro and Smythe focuses his attention on Mira’s psychological collapse just as he did on Cormac’s in the previous book.

Mira is no more likeable than Cormac was for me, and yet I found him a more sympathetic character. His relationship with his twin brother looms large in the story: twins who have worked together in the same field and share the same passion for the anomaly; twins who have always been in competition with one another, who are perhaps not as similar as first appears. As Mira comes face to face with the anomaly, as crew members die and science fails to explain any of the things happening around him, his resentment and frustration with his brother becomes more apparent. As the less socially adept brother, Mira has often taken the back seat, seemingly protected by Tomas. Doubt and suspicion later suggest that Tomas has deliberately side-lined his twin. Even his prized place aboard the Lära, won from Tomas in a game, later appears to have been the result of manipulation.

The push and pull of this relationship, central to Mira’s life, adds a low-level tension that reverberates throughout The Echo. We never ‘meet’ Tomas in person, he is only ever a disembodied voice over the comm, sometimes guiding, sometimes snipping at Mira. But with everything from Mira’s point of view, the reader can never be sure how far his portrait of his brother can be trusted. The bundle of love and resentment that he feels for his older-by-minutes brother, colours everything. And there is no answer to this, just as there is no answer to the anomaly.

All that is clear about the anomaly so far is that it plays with time. The way in which it does so in this book is different to the way in which it did in The Explorer, and understandable rules have yet to be determined. I have a sneaking suspicion that explaining the anomaly is not the author’s intention. Instead, I think that this quartet is going to be all about how we react to the unknowable. As we push out into the solar system and beyond, and encounter things we cannot comprehend, how will we deal? Are we robust enough to face things so far beyond our ken?

Mira is at pains to show how rigorously scientific this mission will be in comparison with the media-friendly Ishiguro’s excursion. He stresses again and again how fit for purpose the ship is, how talented the crew, how detailed the plan. The aim is to gather readings, measurements, information, with which to resolve the mystery. And yet for all the knowledge gained (presumably – see note below) there is no increase in understanding. Perhaps we lack some vital clue or imaginative leap. Or perhaps we have reached the limit of our species’ ability to parse what we experience.

(Note: a small snipe here – they never actually seem to take any measurements, or to try and determine the density of the anomaly and what it might be made of (although they do try to take a clumsy sample), or any other science-y thing that I’d expect of Scientists encountering a New Thing. But I am not wise in the ways of science and there could be a perfectly reasonable explanation. This annoyed me though, and I want it noted).

This was as chilly a read as its predecessor and not any kind of advert for space travel. Smythe’s writing is deceptively clean and cold – it’s like reading mouthwash – so that you don’t quite realise he’s gotten under your skin until it’s too late (for me, Inna’s cycle outside the ship will remain the most disturbing image, not just because of what she suffers, but because of the reactions of those who remain inside). Still, I find myself anticipating the next instalment of the Anomaly Quartet, and the questions it will raise. Whether there are answers or not.

“But we – Tomas, myself, all of us, really – are scientists. We are here to discover. If you do not discover, you are nothing.”