My first pick for Vintage SciFi Month this year is Dinosaur Planet by Anne McCaffrey, published in 1978. I found it in the motherload of old sff books that I received from one of our patrons last year (more about this glorious hoard to come shortly, stay tuned), and I chose it primarily for it’s fabulous cover art by Tim White. That and the fact that Anne McCaffrey was once one of my favourite authors, so I thought I’d drop by. 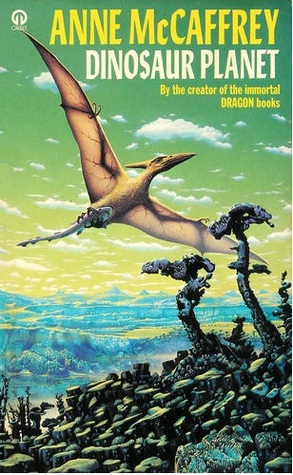 There is, unfortunately, a very good reason why you shouldn’t revisit authors, books, tv shows and movies that you adored when you were very young. There’s probably an equation out there that covers this elegantly, but it seems that the further you have travelled in time from the subject of your youthful idolisation the greater the disappointment when you revisit.

Pern was one of my first loves and I had a lot of admiration for Anne McCaffrey when I was a young teen. I remember reading (I think in an introduction to one of her short story collections) that she’d had big difficulties writing Dragonquest and I remember being hugely struck by the idea that writers had to work at their writing. That she’d persisted even after being told to burn her first draft was, to my young mind, massively heroic. I still have copies of Dragonsong and Dragonsinger on my shelves (Menolly was awesome – I hope she still is) in memory of my Pern Passion, although I haven’t read either in decades.

I wonder if Dinosaur Planet was an earlier piece of writing that McCaffrey revisited after her eventual success with the Pern books. It definitely feels like an earlier work, and there’s quite a marked difference between the first and second halves of the story, as if the author changed her mind about how the book should go when she picked it back up. The beginning is quite dry and info-dumpy and the dialogue clunky. Then at about the halfway point, things get a lot more action-focused and it reads a lot smoother.

The plot isn’t exactly hefty. The basic gist is: an exploratory group are dropped off on the planet Ireta to assess its resources, and then lose contact with their mothership, ostensibly because of a cosmic storm. A member of the group starts the rumour that they’ve been abandoned, despite evidence to the contrary. The group splits in two – partly because of this rumour and partly because of cultural differences – and the “heavy-worlder” group tries to kill the “light weights”. The “light weights” escape and hide, and the book ends with them entering cryosleep to conserve their food and water and await rescue.

While it’s signposted (in giant neon lettering) from the beginning, the group splitting into the “heavy-worlders” (people who were born and raised on heavy gravity planets and are therefore more muscular) and the “light weights” (born on regular gravity planets or ship-born) was … interesting … because of the reasons behind it. Everyone in the exploration team is a human member of the Federated Sentient Planets, heavy-worlder and light weight alike, and therefore vegetarian, because that’s a part of being ‘civilised’ in this future. But the heavy-worlders (described with massively biased language from the start), employed for their strength and stamina, become over-stimulated when they witness one dinosaur hunting and eating another, and start sneaking off to do the same, (it’s heavily hinted that they’re have sexy times too). The light weights are horrified to discover that the heavy-worlders have reverted to eating meat and the situation quickly collapses into a them versus us situation.

At no point is this appetite for flesh seen as a cultural thing to be understood or respected. Instead, eating meat = violence and indifference and is therefore Bad. And the inherent racism in all the talk about the heavy-worlders is at odds with the ‘civilised’ future in which alien races such as the rock-like Theks and the avian Ryxi are also embraced by the Federation despite communication difficulties and differing cultural practices. For example, the Ryxi practice a mating ritual in which males compete for a female and the successful male kills his rival(s), yet no-one gets uppity about that. Which leads me to conclude that the heavy-worlders eating meat is only objectionable because either (a) they are human and humans are supposed to be above that now; or (b) because McCaffrey says so. (I suspect the latter).

But what’s this all got to do with dinosaurs, I hear you cry?

Blowed if I know. I was hoping for a prehistoric romp, with a couple of meaningful up-close-and-personal encounters à la Jurassic Park (film not book). I still haven’t found the words to categorise what it is I’ve just read, but it wasn’t that. If it hadn’t been for the “golden fliers” (Pteranodons to you and me) I’d have felt completely cheated. I enjoyed most the bits in which the team observed the behaviour of the golden fliers and witnessed them solving problems, using tools, working together and adapting to their environment. It didn’t seem to serve any particular purpose in the story, but it was pretty cool nonetheless.

And because of them I want to know what happens in the second part, Dinosaur Planet: Survivors. (If I’d know that this was only the first half of a duo, I wouldn’t have read it, but now that I have, I need to know how it all ends). How long will the light weights be in cryosleep for? Will the golden fliers have a fully-fledged culture and society by the time the humans wake up? (Am I expecting too much? Most likely). What will have happened to the heavy-worlders? Will they still perceive the light weights as a threat? Will the Theks come to the rescue or not? And how did the dinosaurs end up on Ireta in the first place?

I don’t recommend Dinosaur Planet as any kind of introduction to McCaffrey’s work, or as a good read. Honestly, let me have done the leg work so you don’t have to. Find something awesome and tell me about it and I’ll consider myself well-paid.