The Drought by J G Ballard

This is another one of Ballard’s four ‘disaster’ novels, of which I have now read three. The Drowned World imagined the melting of the polar icecaps and a flooded, tropically hot London. The Crystal World posited a world that was slowly crystallising. In The Drought we see a world in which industrial pollution causes water to become dramatically scarce. (The other book in this series is The Wind from Nowhere, in which the world is … you’ve guessed it … windy. It was Ballard’s debut and a novel that he later discounted as a “hackwork”. It’s on my list nonetheless). 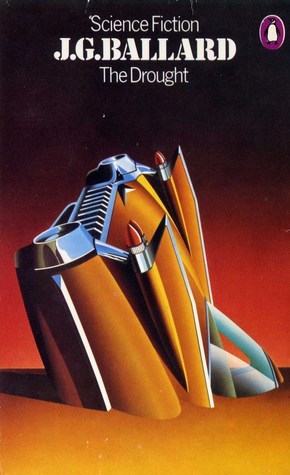 The Drought was the third of these natural disaster books to be published and the internet’s general feelings about it seem to be that it’s better than the other three, but reading is always subjective. You can tell me that structurally or thematically this is the stronger book, yadda yadda yadda, but in the end my experience of it was far less striking than my experience reading The Drowned World, which remains my favourite Ballard book of those I’ve read. Something about the imagery in that one resonated with me. Crystals and sand, while equally stunning in Ballard’s hands, not so much. I guess I must be a water bender.

I’ve gotten used to how Ballard uses characters now, so was prepared this time for the cast of repellent oddballs and the navel-gazing protagonist Dr Charles Ransom. I think some of my fascination with Ballard’s writing centres on his strange, lonely characters. They’ve not been sympathetic creatures up ‘til now, but I recognise their introversion. And I can’t help feeling that they are all suffering from some sort of unrecognised trauma. There’s always this feeling that they’re in a delicate holding pattern that the slightest upset could destroy. Certainly, there is a kind of invisible wall between them and everyone else, through which they can interact, but never really connect.

There’s still plenty of action, though, and, as usual, it’s all weird. Things kick off, after a brief introduction to the state of things, when Ransom decides to go to church only to become the victim of a peculiar manhunt performed by a clan of darkly clad fishermen who eventually catch him with nets. Next, a quick visit to the zoo, then full-scale battle between civilians and armed forces on the beach. That brings us to the end of Part One. Part Two zips forward ten years into a Mad Max style world in which water is now fought over, bartered with and hoarded, and small fortified communities have replaced the suburban sprawl. Then Part Three takes us on a dreamlike journey back into the ruins of the civilised world and throws in some lions towards the end. There’s a lot of Shakespearean allusions too, which I’m not sure how to place. Anyhow, it’s all pregnant with meaning and strongly visual.

And this is something that I am coming to appreciate most about Ballard’s writing. I may not really appreciate his paper-thin plotting and cipher-like characters, but I love his imagery. The worlds he has created so far have blown me away with their transformation from mundane to alien and I don’t think I’ve ever come across an author who so clearly links his work with that of an artistic movement. Because Ballard is all about Surrealism. In The Drowned World he references Paul Delvaux, Salvador Dalí and Max Ernst; in The Drought Dalí again and a specific piece by Yves Tanguy called Jours des Lenteurs. (In The Crystal World he’s definitely still channelling Ernst, but side-steps mentioning a Surrealist work in favour of Symbolist Arnold Böcklin’s Isle of the Dead, a dreamlike piece that Böcklin painted multiple versions of between 1880 and 1886). I get such a kick out of this. Not only because I am a primarily visual being (I’ve mentioned before that I’m mildly synaesthetic and ‘see’ letters, words and numbers as colours, poems, books and people as strings of colours and visual ‘effects’ – my favourite people sparkle, for instance. No, not like Meyer’s vampires. Sheesh.), but because I love overt cross-referencing and meta-textual stuff (and the extras and commentary on dvds).

I’m going to expand on that slightly: I knew what Surreal art looked like, but not the thinking behind it when I read Ballard’s The Drowned World a couple of years ago. Diving down that particular rabbit-hole revealed that the movement was a reaction to the First World War and that its artists concerned themselves with the unconscious, with dreams and madness, the random and illogical. These ‘disaster’ books of Ballard’s have a similar preoccupation with strange worlds and irrational behaviours, and I like that he encourages his readers to add dimension by seeking out the artwork that inspired him. More broadly, I love that many different works, in any number of formats, can exist in the same imaginary space. It’s like we all have our own individual brains, but also share a giant brain of images and references, that gets richer and more complex over time.

TL;DR: The Drought is as fabulously weird as anything else Ballard has written, presents some incredibly striking images and continues to explore his particular themes of time and “inner space”, alienation and world-weariness. Recommended if you already dig his style. A good place to start if you’re new to him because it’s all bonkers anyway.