Tales from the Inner City by Shaun Tan 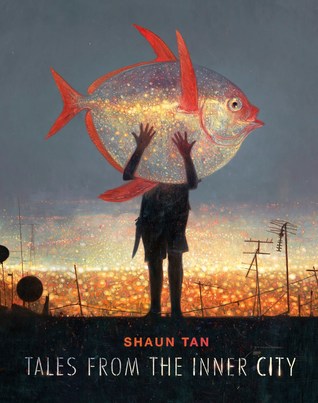 Shaun Tan is a favourite artist of mine, whom I first stumbled across via his picture books. So I was very excited to see Tales from the Inner City appear on the new books display at the library a couple of months ago. Even more so because Tan won the CILIP Kate Greenaway Medal for Tales back in 2020.

In Tales from the Inner City Tan combines short stories, poems and artwork to address twenty-five different animals. No piece has a title, instead each is introduced by a silhouette of the animal that is the focus of the story. The collection addresses humanity’s relationship with animals, through Tan’s own distinctive lens. It’s not always a comfortable read, but it’s one that prompts you to question how and why we do things – and that’s never a bad thing. I feel like it’s a book that Jeff VanderMeer would appreciate: the opening story about crocodiles living in a perfect wetland replica on the 87th floor of a city skyscraper, waiting patiently for humanity to pass into history, gave me subtle Annihilation vibes, for sure. Other stories, like that of giant snails mating in the city streets, and lungfish washing up into streets and gutters and slowly morphing into people, have a similar (I don’t know how else to describe it) biological weirdness feel to them.

There are beautiful stories too. In one, Tugboat, the “Greatest Cat in the World” has gone missing. In searching for him, his young owner discovers that Tugboat was not just her cat, but everyone’s cat, and a huge memorial service is held for him when it is understood that he has died. In another, every home has a room with a pig inside, which disappears “slice by slice”. One family’s children decide to free their pig and take it to the park to be with all the other pigs, freed by other children. They make prosthetics for their pigs’ missing parts. And in yet another, a cloud of butterflies descends on a city, almost like a weather front, and everyone stops, just for a moment, to appreciate the sight.

For me, the most moving tale was about dogs. Using verse and a series of paintings, Tan expresses the way in which mankind and dogs have travelled through history together. The paintings each depict a very similar composition, with a different person and dog in each one. And the final painting in the series actually choked me up. You can see more pictures from this particular story on Tan’s website here because this story has been published as a separate book.

I do love Tan’s subtle sense of humour, most apparent perhaps in the story about the fox:

“I steal odd socks and keys, move bits and pieces around just to drive you crazy, an itch to the foggy complacency of your life, tiny stones in your shoes. You need these things!”

And in the story about the bears. Which is maybe the story that most overtly expresses Tan’s concerns. When the bears arrive with their lawyers to sue humanity for “Theft. Pillage. Unlawful occupation. Deportation. Slavery. Murder. Torture. Genocide” and we learn that human law is, in the hierarchy of such things, “just below Walrus Law”, it’s only the beginning. After the bears are dealt with (ahem), it is then that the cows arrive. With their lawyers.

This whole book was a stunning reading/viewing experience, and one that underlined a lot of my own interests and concerns. It’s a book with a lot of worries though, about what the future is going to look like, about what we’re doing now and what we’ve done in the past, and what it means to choose to be ignorant of this. As such, it’s a difficult thing to recommend it. To hand this book to someone and say “hey, read this” is to appear to want to sway that person’s opinion. Instead, this is a book to be discovered, on a library display stand or in a bookstore, and in being found thus more readily appreciated.

For what it’s worth though, I really did enjoy it.

You can see more of Tan’s beautiful, often surreal, artwork on his website.