This book would be an excellent candidate for a second Books with a Body Count post both because of the quantity of deaths and their ickiness, (and sheesh, were they icky!). If I’d known going in that things were going to get as messy as they did, I’d probably not have read this, but Koepp is a snappy writer and by the time I’d cottoned onto the grossness of the situation I was invested. Dagnabbit.

Also, Cold Storage is funny. Really, laugh-out-loud-at-the-most-inappropriate-times funny. And there’s a lot to be said for making jokes in life-or-death situations. 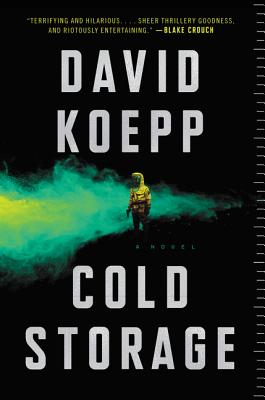 Back in 1987 military specialists Roberto Diaz and Trini Romano investigated a potential biological weapon in a small Aboriginal community in the Australian outback. The situation they found there was about as bad as it could get, but they contained it and a single sample of the creepy-as-all-heck fungus that caused all the trouble was brought back to the United States to be stored in a government facility in Kansas. Everyone dusted their hands off at a job well done and went about their business.

Jump forward to 2019. Roberto and Trini’s boss has retired early, the government facility has been sold off to a private storage company, and the planet’s warmed up some. Night guards at Atchison Storage Travis ‘Teacake’ Meacham and Naomi Williams start looking for the source of an alarm beeping somewhere behind the walls in the reception area and end up uncovering several hidden sub-basements in their workplace, along with the creepy-as-all-heck fungus thing growing down there. Cue all manner of nasty, splattery, glutinous goings on. *shudder*

In a nutshell, that’s it. This is a tightly written, confined tale of one night’s survival against stacked odds. The things that happen at Atchison Storage threaten the entire planet and life as we know it, and nobody beyond the small cast within the walls of the place knows anything about it.

But Koepp is great at two things – heck, he’s a big-shot screenwriter who’s worked on some huge films like Jurassic Park, Mission: Impossible and Panic Room, he’s probably great at far more than just two things – but the two I really appreciated in Cold Storage were his tension ratcheting skills and the speed with which he establishes his characters. The story is told in easily digestible chunks that move through points of view as suits the needs of the plot, so that at any one time the reader knows how Teacake and Naomi are doing, what’s going on in the mind of that infected deer over there, and how close to death the douchebag biker guy who thinks he’s in an FPS game is. By flipping through the various characters Koepp is able to keep us in an almost permanent state of nervous excitement as every time we leave a character it is at the tensest possible moment.

Add to that that Teacake and Naomi, and the only-out-of-retirement-for-tonight Roberto (and Trini, but there’s absolutely not enough of Trini), are easy to like and easy to root for, and you’ve got yourself an entertaining couple of hours of terror. Roberto, good-looking even twenty years later (Trini calls him a “Mexican Ken doll”), smart, efficient and prepared for anything, provides a reassuring presence: he saw it all back in ’87 and he, Trini, and their boss Gordon Gray made contingency plans for just such a day as this. Naomi and Teacake give us the reason to save humanity, (a necessity when you have a handful of real assholes on the cast too). Naomi is the single mom working nights and trying to study part-time. Teacake is the slightly naïve ex-con trying to go straight and trying even harder to wangle a meet-cute with Naomi.

These details give the reader purchase, something to hold onto during the ensuing madness. From Naomi’s feelings about her daughter, whom she loves, but doesn’t always like, to Teakcake’s overactive imagination; from Roberto and wife Annie’s choice of signal so she knows he’s gone to work, to Trini’s stamp collection; from asshole Griffin’s burning desire for a nickname, to asshole Mooney’s reasons for having both a dead deer and a dead cat in the boot of his car; the details make each character distinct, understandable even if not likeable. We hope that Naomi and Teacake will survive the night, just as surely as we hope the assholes don’t.

Maybe, just maybe, I question the ending a little bit. Having seen what the creepy-as-all-heck fungal hazard can do over the course of the story, I just might have a few quibbles with how everything is wrapped up. But other than that, this was a fast, diverting read of the remove-brain-sit-back-and-enjoy kind. Koepp knows what he’s about and employs both bookish and film conventions to tell a rollicking tale. If you like Andy Weir’s style of humour in The Martian and Project Hail Mary, or perhaps M R Carey’s hungries in The Girl with All the Gifts you may get a kick out of this one.