Through the Woods by Emily Carroll

The things that unsettle me most are those for which no explanation is given.

Through the Woods is a collection of five eerie short stories told and illustrated in Emily Carroll’s distinctive style. Each story deals with barely understood things, strange presences in our world whose purposes are not clearly known – a man in a wide-brimmed hat; a voice singing in the dark; a deep, dark hole; a ghostly presence with a pulse; a peculiar tentacled thing wearing a human skin – and is illuminated with a gorgeous palette of saturated colours offset by black pages, borders and backgrounds for the most part. The stories build in intensity from slightly spooky to outright creepy, and while some are not as successful as others, they’ve each left an impression on me. 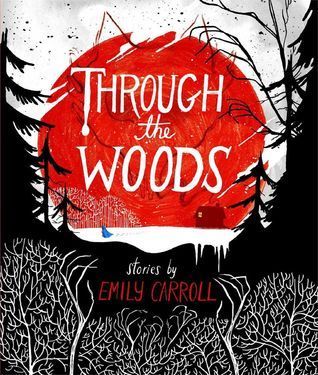 Each tale is told by or from the point of view of someone who stands slightly apart from their world. A girl who wants to follow her father’s advice but is overruled by her older sister; a young woman married off to a man she does not know; a brother with none of the successes that his sibling is blessed with; the ordinary friend of a seemingly gifted young woman; a younger sister staying with her older brother and his fiancée for the holidays. Each one of them alone, despite the company. Because the monsters of the world like to pick off those who won’t be missed.

The first story is Our Neighbour’s House. It’s not the strongest beginning, but it sets the tone for the rest of the collection. I was most struck by the cold, dangerous atmosphere beyond the house, the isolation, and the house not really being a place of refuge or safety.

Next up is A Lady’s Hands are Cold. From a visual perspective this one was definitely a favourite: red, blue and yellow are used to great effect and the page layouts are particularly stunning. I also love that, despite the Bluebird overtones, the danger in this story comes from another direction entirely.

The middle story, His Face All Red, is another favourite – this one, because it’s left completely up to the reader what the brother’s fate might be at the end. Suggestions and hints are Carroll’s tools when telling all these stories, and she never really shows the reader anything that can be implied instead.

My Friend Janna was probably the story I was least enthused about in this collection – it felt ‘loose’ compared to the others and took its sweet time getting to the good bit. The ghostly presence was cool and brilliantly visualised (it made me think of Tim Power’s vampires, even though it’s really not like them at all) and the atmosphere, particularly in the second half of the story, was deliciously spooky.

The Nesting Place wraps up the volume. It’s a longer piece than the others and I really enjoyed the story. Contrarily, the slow set up worked for me here, where in My Friend Janna I was impatient. (What can I say? I’m a complicated person). Of all the tales told in Through the Woods this one is the most upfront about what the monster is, and what it wants, but I really like the main character, Bell, (she just wants to be left alone to read, is it too much to ask?) and the visuals for this one – Carroll uses pencils or crayons in this one to make softer, less definite lines, and a more subdued palate dominated by browns and greys – really worked for me in setting a kind of Du Maurier-esque tone.

Finally, there is the introduction and conclusion – two very short pieces (connected, I think; the child in both wears the same pyjamas and sleeps in the same bed), that neatly underpin the thread running through the book: we may be afraid of what hides in the dark, but uncovering the monster doesn’t remove that fear, if anything, it intensifies it, because now we know what we’re running from.

Through the Woods is an enjoyable trip through Carroll’s unsettling world, (more of her work can be found on her website, if you enjoy a visual treat) and is a collection of interesting stories, interestingly told. The perfect way to while away an October afternoon.