I totally intended to do a SciFi Month Plans post earlier this week, but what can I say? time was not in plentiful enough supply for that to happen. It’s Saturday evening as I type this … I don’t even know where Saturday daytime went … and I’ve just discovered that this post I thought I’d written is actually just an opening paragraph and some notes (thanks past me, you lazy mare).

Sooo, I’m flying by the seat of my pants today. Let’s do this thing! 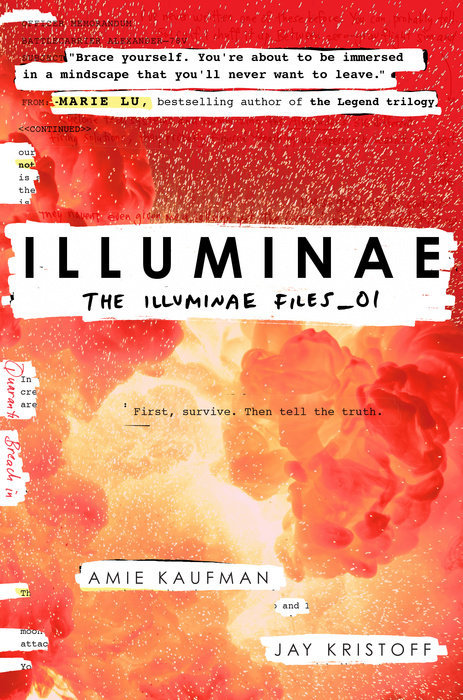 I’m 98.8% sure that it was a conversation with the marvellous Maddalena that tipped me from doubt to daring about Kaufman and Kristoff’s Illuminae. It’s one of those books that was firmly on my TBR list until I actually got hold of a copy, and then the format of the book itself put me off. It looked like hard work. (For anyone who hasn’t picked up Illuminae, it’s a story told via ‘found documents’ arranged in chronological order and consisting of emails, transcripts of interviews, scientific reports, court martials and instant messages, descriptions of video footage, some diagrams, maps and bits of propaganda. It is, at first glance, dense).

(Incidentally, I’ve spent almost three hours trying to find which post of mine or Maddalena’s it was in which Illuminae got mentioned in the comments. I’ve given up now and am just going to thank you, Maddalena, for the recommendation. Because I really enjoyed this story. (And if it wasn’t you, after all, then sorry, and thank you anonymous person that I mistook for Maddalena)).

I love stories that are told via letters, like (current favourite) Ella Minnow Pea by Mark Dunn, or include newspaper clippings and confessional documents, like (yes, I will keep mentioning it) You Let Me In by Camilla Bruce. I get a big kick out of this kind of storytelling. So I guess it must have been the visual noise of Illuminae that spooked me – that old worry about not being a smart enough reader – with all those different fonts and page styles. But what looks like a cacophony of voices is actually an incredibly tight, fast-paced and exciting thriller/horror about biological weaponry, artificial intelligence and evil mega-corporations. With Princess Bride references.

The book opens (after an introductory message from The Illuminae Group, who compiled the dossier of documents that we’re about to read) with two interviews, taken right after an attack made on the Kerenza colony, a mining operation on an ice planet, by a rival corporation. The two survivors being interviewed are our main characters, Kady Grant and Ezra Mason. They’re both in their late teens, and until the morning of the attack, they were a couple. Kady is quite a spiky character and Ezra is the gentler of the two and a Funny Guy. They’re both likeable and their interaction throughout is entertaining and keeps the story on track. If I couldn’t care less about their relationship, it’s only because it’s the least interesting thing in the story, and not because they’re not good people.

Because biological weaponry. Of the type that mutates beyond its original function and does terrible things to people.

The corporation that attacked, BeiTech, used a shiny new bio-weapon to subdue the populace on Kerenza in what is presumed later to have been a “live-fire exercise”. Three spaceships answer Kerenza’s distress signal: a military ship called the Alexander, a research vessel called the Hypatia, and a freighter called the Copernicus. Refugees, including Kady and Ezra, are taken aboard these three. The Alexander sustains damage during the rescue before the ships turn to flee for the nearest way station, with BeiTech’s dreadnought, the Lincoln, in hot pursuit.

This is already enough to have kept me entertained for the duration (Battlestar Galactica, anyone?), but then, some refugees start exhibiting disturbing behaviours, the AI aboard the Alexander appears to go a bit wonky, destroys the Copernicus and is shut down by the horrified human crew, inter-ship communications are cut, and, well, the you-know-what hits the fan. Because quarantine measures have failed, the numbers of infected are mounting, and everyone, infected or not, is stuck on a ship, in space, with nowhere to escape to. The tension just keeps on cranking up, with a handy body-count provided, along with a countdown to intercept by the Lincoln – just to keep that tension right up there.

And this engineered virus is scary. I don’t want to give away details that might ruin the book for those who haven’t read it, so I’m just going to say that while there’s nothing new here really, there was some great uses of classic horror set-ups like creepy writing on the wall, someone being locked in with the infected, and characters having to travel through an infected area to get to safety. Add to this the complication of an AI that has achieved sentience and is making some … interesting … decisions, and that after being shut down once is also now leery of the humans it is supposed to protect, and you’ve got an entertainingly tense read.

If there was one thing about this book that I was less enthused about (apart from the they-will-of-course-get-back-together romance) it was some of the pages that represented AIDAN’s experiences. For the most part I really enjoy text being used in creative ways and I loved it in Illuminae too, but towards the end I found myself getting just a little bit irritated by it. Like, it was good until it wasn’t. I suspect this was just a me thing. I do want to know a lot more about AIDAN and Kady’s continuing relationship/association in the next books, nevertheless, and it will be interesting to see if/how/in what way AIDAN develops.

I’m hoping for a long hard look at the other mega-corp, WUC, too. The surface has barely been scratched there and I’m hungry for more.