To Be Taught If Fortunate by Becky Chambers

This is the kind of book that makes my head (and heart) feel very full.

To Be Taught If Fortunate follows four astronauts on a crowdfunded eighty-year journey outwards, to explore four astronomical bodies (Aecor, Mirabilis, Opera and Votum), not with the aim to settle, terraform or colonise, but only with the intention to learn more than is already known about these places and the life that has developed on them. The crew are beautifully diverse – a very Chambers-esque found family – and there is no tension or drama to be found in their relationships with one another. The author wants her readers’ attention on bigger things. The book takes the form of a letter home, written by engineer Ariadne, asking an important, if not urgent, question of those left on Earth. 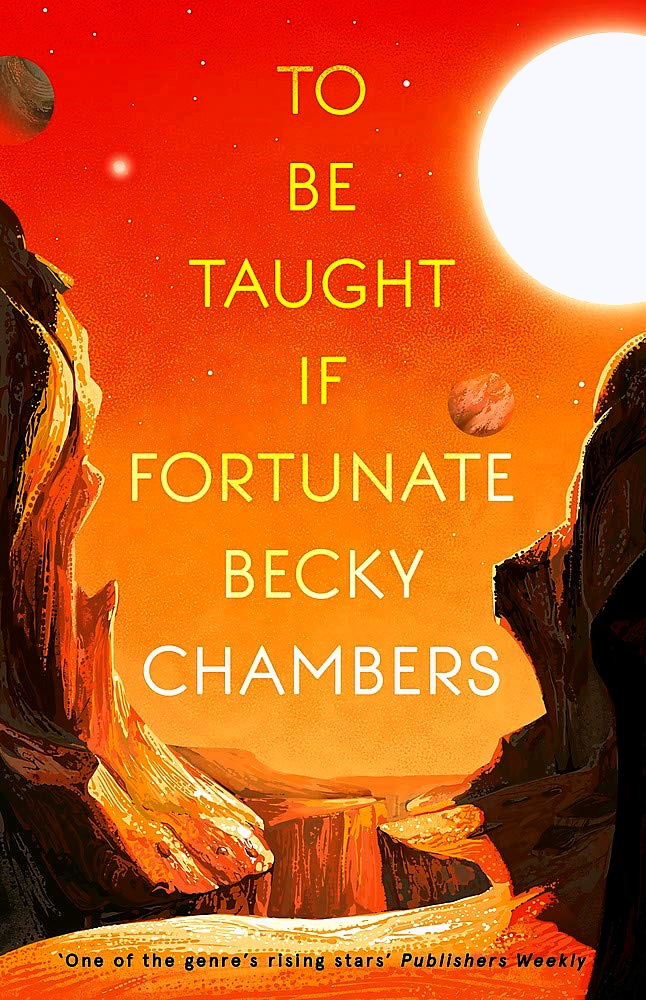 I wouldn’t enjoy Becky Chambers’ books if her optimism didn’t speak to me as it does. The worlds she imagines are kinder and more tolerant than our current situation suggests we will ever achieve, and her championing of our humanity and knowledge for its own sake makes my heart sing. I especially love that she is committed to showing other ways in which the human community could work, and in To Be Taught this is the crowdfunded, non-profit space exploration programme of which the Lawki 6 mission is a part. Just this idea on its own would be enough for me to have loved this book.

“Don’t believe the lie of individual trees, each a monument to its own self-made success. A forest is an interdependent community. Resources are shared, and life in isolation is a death sentence.”

But it gets better. And this is where my head starts to fill up: because Chambers’ keeps on running with the idea of cooperation. Yes, the mission that Ariadne, Elena, Chikondi and Jack have embarked on has been made possible by international citizens’ donations, but that’s just the beginning for them. The real work is in the science. And it is work. It is time and process, slow and steady and meticulous, done together, over and over again. Ariadne takes a great deal of pride and pleasure in her work as the ship’s engineer: keeping systems running, doing whatever is needed so that science can happen. And honestly, how often do you read about this kind of role? About facilitation – data-entry, prepping petri dishes, replenishing kit – and how this is actually the big part of those eureka moments and this is the majority of the work.

Not that the discoveries aren’t wonderful too, of course: The glowing lifeforms beneath the ice on Aecor, the biological bonanza on Mirabilis, the slug-like “rats” on Opera and even the microscopic life on tide-locked Votum that reveals the biggest discovery of all. So too are the modifications that the crew undergo for each planet that they visit. Instead of terraforming the new worlds to suit human needs, in this universe Chambers has her characters undergo “somaforming” to adapt their bodies to the places they visit. So for gloomy Aecor the crew develop skin that “glitters” something like a squid’s, to catch and reflect what little light there is, and for super-Earth Mirabilis they become exceptionally muscular. Discovery isn’t reserved for ‘out there’ – these manufactured biological changes, and the more expected ones, like the crew’s aging over the course of their journey, are just another source of wonder and curiosity.

And the question that Ariadne and her fellow crew members ask of those who remain on Earth (but which I think Chambers is really asking us, her readers), is everything. It’s not about the big stuff: borders and politics, wealth and mega-corps and individual achievements. It’s about the bigger stuff: how each individual feeds into a larger conversation; how many people, in many roles make discovery possible. This is fiction in which we are encouraged to think of ourselves as a planet-wide community, more than the sum of our parts, and to be both comforted and inspired by that.