In the Black by Patrick S Tomlinson

I didn’t choose In the Black because I’d heard anything good or bad about it, or because I’d read anything else by (or was even aware of) the author. I simply needed something to listen to while I finished decorating the bathroom, and this was available on my Libby app tbr. I’ve not read much in the way of MilSF and wasn’t sure I’d like this, but I’ll admit to being pleasantly surprised. With one caveat – which we’ll get to. (Incidentally, because I listened to this rather than reading it, I didn’t take my usual notes and feel oddly unprepared now, to write this post). 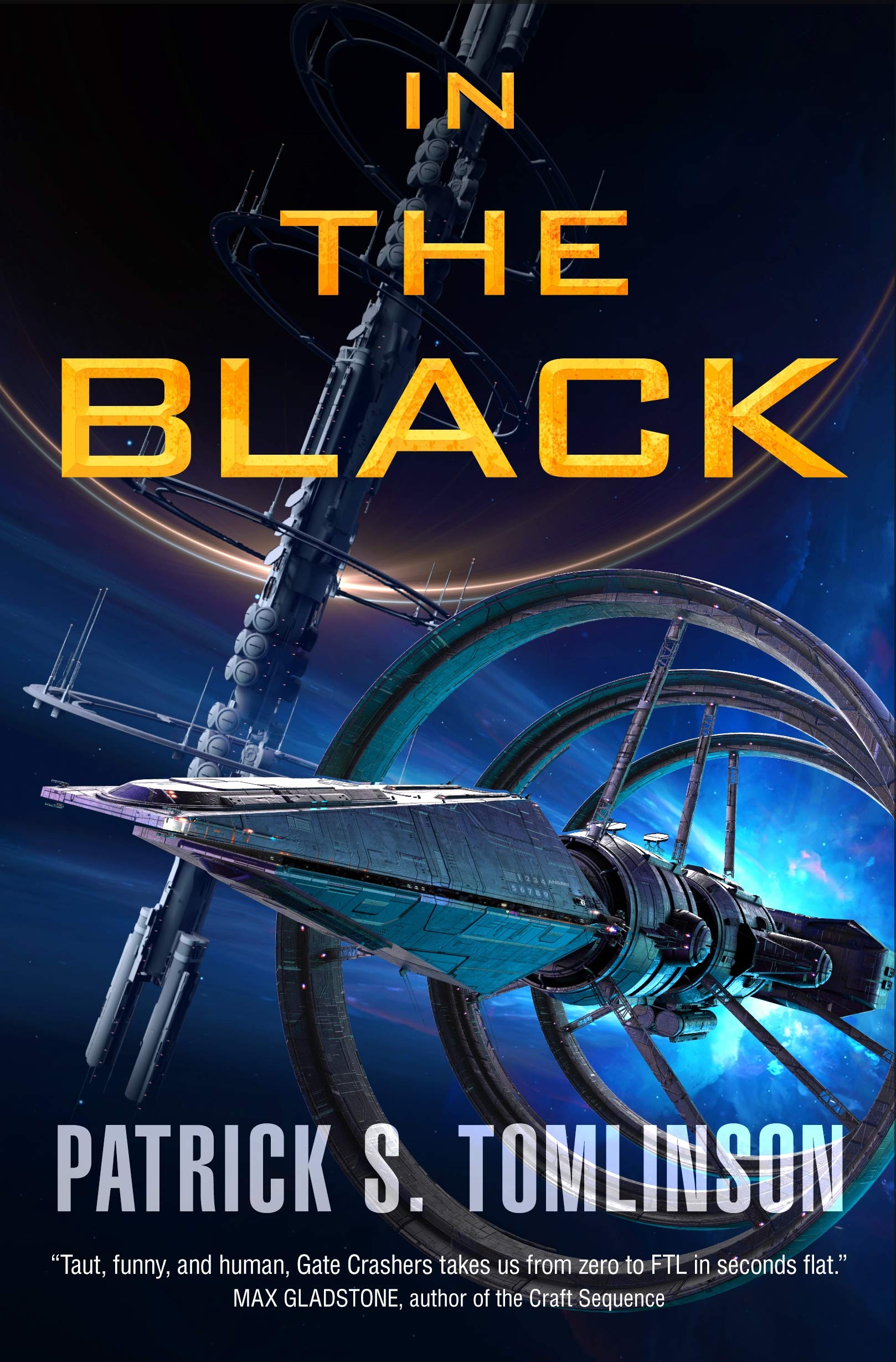 Four hundred years or so into the future and space is corporately owned, much like in Murderbot’s universe. The Combined Corporate Defence Fleet, the CCDF, have sent the Ansari and her crew to patrol the boundary between human and Xre space, (it’s been seventy years since humanity was at war with the Xre, but the peace between the two species is still a tense one, fuelled by mutual suspicion). When two of the Ansari’s reconnaissance drones are taken out, Captain Susan Kamala and her crew must investigate and respond, without renewing hostilities if they can help it.

The ‘Derstu’ (a kind of captain by consensus) Thuk and the advanced Xre warship Chusixx, on the other side of that invisible line defined by treaty, is quite literally poking the bear as per orders, for reasons they don’t fully understand or, at first, question. In taking out the two drones, they initiate a stealthy back and forth with the Ansari, testing each other’s capabilities and trying to understand each other’s motivations.

This portion of the story was absorbing. Tomlinson’s Xre are a fully fleshed-out (although maybe ‘carapaced’ would be a better descriptor) alien race, with an interesting history behind them, (I have a soft spot for insect-like aliens it would seem, I was as fond of Julie E Czerneda’s Panacians in Beholder’s Eye as I am of the Xre here). They have lost their home-world to a more advanced species, and so they now take from other, less-advanced species in the same way. And humanity is the first species they’ve met that is on a more or less equal technological footing. The Xre have also undergone social upheaval. Once ruled by queens, they now follow the Grand Symphony – and a Derstu like Thuk must follow the Harmony of their ship – but there are still physical differences among the Xre than speak to their previous social hierarchy (this is where I really miss my reading notes – I’d have recorded the types of Xre and which had extra legs, mandibles, or wings) and can influence their behaviour. I love this sort of detail.

The second storyline doesn’t appear to be related to that of the Ansari and the Chusixx for the longest time. Tyson Abington, CEO of transtellar Ageless Inc. has a couple of problems. The first is that he’s stupidly rich with all the perks that accompany such a condition, and is difficult to identify with, even if he’s not a complete A-hole, (OK, that’s just my personal opinion, but it’s definitely a problem). The second is that one of his mining colonies is experiencing an outbreak of an unidentified virus that is definitely going to affect stock prices. Oh, and the virus has been engineered, so someone’s got it in for Ageless. Tyson teams up with epidemiologist Doctor Elsa Spalding (the one who discovers the origins of the virus) to investigate and eventually, they find their way into the region of space where Captain Kamala, Derstu Thuk and their respective crews are having a much more exciting time. It’s possible that the author of Tyson’s woes, and whoever is trying to reignite the war with the Xre may be one and the same.

I wouldn’t have enjoyed In the Black as much as I did if it weren’t for two things. One, Tomlinson writes good characters. Susan Kamala is a great older woman in command, and her rapport with her motley crew (none of whose names I wrote down, dagnabbit) is a delight throughout; equally Thuk and their Harmony (again, no names, sorry) are believably alien, but still easy to relate to and not without humour. Even Tyson is OK really. Especially when Elsa comes on board and pokes holes in his privileged take on things. And second, this is an author with a great sense of humour. My absolute favourite instance of this is when the two crews, human and Xre, signal farewell to one another in their respective traditions; but there is comedy and a recognition of absurdity throughout.

The caveat is this: the book ends on a cliffhanger. If I’d been reading a physical copy of In the Black I would have at least seen that I had only a few pages remaining, but in having it playing in the background while I was working, it took me completely by surprise. It’s a pretty abrupt finish too, I had no sense of the story winding down, and that’s left me mildly annoyed. I suppose, on the upside, this shows how much fun I was having listening to it.

To add insult to injury, the sequel doesn’t yet exist. So if this sounds like your cup of tea, please go in knowing that Tomlinson is going to leave you hanging.

Finally, I recommend the audiobook. It’s read by Alyssa Bresnahan, who does a great job of conveying tension, warmth and humour as necessary.

(And yes, our bathroom is now beautiful).